When I first started 3D modeling with SketchUp, the software company that developed it, @Last had been recently acquired by Google. When my book “Woodworker’s Guide to SketchUp” was first published in 2010, Google was included in the name. I liked the business model; there was a very functional free version and a “pro” version. The biggest difference between the two versions was the types of files that could be imported and exported. People could learn how to use the software without any expense, people who needed the features of the paid version could upgrade when they were ready, and enough “pro” licenses were sold to keep the wheels turning. A few years later, in 2012 Google sold the company to Trimble Navigation and the business model changed. 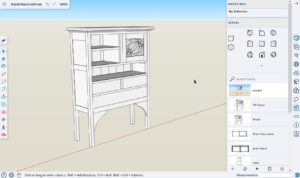 The “free” desktop version of SketchUp was still available but as the years passed the emphasis shifted to more “encouragement” to use the paid “SketchUp Pro”. In 2017 the company announced that SketchUp Make 2017 would be the last iteration of a free version that users could download and install on their own computers, but a free version would be available online. I’m not keen on software that doesn’t live on my machine, but there are situations where software that lives in the cloud makes sense.

The first (and best) example that comes to mind is in public schools. Because the computer that actually runs the model is somewhere else, SketchUp Free can run on a bare bones Chromebook or laptop. The image at right is one of my models in the current online version of SketchUp. The interface looks different, and there aren’t as many options as the desktop version but it is fully functional and performs well. If you don’t want to spend anything on software and are willing to adapt to “cloud” software you will be able to design, engineer and plan just about anything without spending a penny.

Five years is a long, long time in the software business and earlier this year SketchUp stopped offering downloads of SketchUp Make 2017. If you do an online search of the term “Download SketchUp Make 2017” you can still find the software on Cnet and other sources. There are a few issues with that, particularly if your operating system is newer than Windows 7 or recent versions of the Mac OS. It might not run, it might run slow, or it could crash. The newer versions of SketchUp Pro are continually supported and updated. There haven’t been any earth-shaking changes to how the program works or what you can do, but there have been major changes “under the hood”. In newer versions of SketchUp it is easier to model quickly and accurately. I come from frugal stock, but I can no longer recommend using SketchUp Make 2017. It will be missed but it is time to move on.

SketchUp is still the best way I know to design, engineer, plan and present any project from simple  to comlex. So, if you want to learn 3D modeling what are your choices? SketchUp Pro has a 30-day trial period. That likely isn’t enough time to master using SketchUp but if you set aside time to learn the basics during the 30 days you’ll know if SketchUp is worth it for you before you purchase the subscription. The current price of $299/year is reasonable for what SketchUp allows you to do. It won’t be as painful if you compare the price to other software such as AutoCAD or Solidworks or remember other ways you spend $25 a month.

Over the last 12 years I have helped thousands of folks learn to use SketchUp. If you’d like to learn, check out my books, classes and free tutorials on this site. This post “10 Things I Wish I Had Known About SketchUp” is a great place to start.

Click my signature below to send me an email.