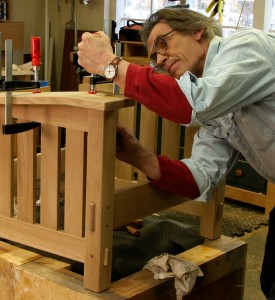 ReadWatchDo.com is a growing website, interested in making useful things that look good and last longer than we do. We’re equally interested in sharing knowledge and developing new methods to communicate and share the things that make the process mean something.

Bob Lang’s other website, craftsmanplans.com has been around since 2001 and this site was launched in 2011. We hope you’ll enjoy your visit and learn more about his books and woodworking plans.

This post “Why I Wrote Shop Drawings for Craftsman Furniture” explains of bit about who Bob is and where he came from. Here is a brief biography:

I was born and raised in northeastern Ohio, in the college town of Kent. In the early 1970s, I dropped out of college and became a cabinetmaker. Like many of my generation I didn’t want to wear a tie and sit in an office. I learned the trade in several different shops, including building speaker cabinets for sound systems, wood boat repair on Lake Erie, scenery and prop building for an aquatic theme park in an unlikely location, and in more than few commercial cabinet shops. I also ventured into my own business and spent the early 1980s designing, building and traveling the country to sell my stuff at arts & crafts shows. By the late 1990s I was working as a project manager/engineer in the architectural millwork industry.

My first magazine article was published in “Woodshop News” in 1998, followed by my first article for “Fine Woodworking” Magazine. My first book, “Shop Drawings for Craftsman Furniture” was published in 2001. In 2004, I began to work full-time for Popular Woodworking Magazine, where I am currently the executive editor and illustrator. Along the way I’ve written several books and about 100 magazine articles.

Here is the “official” biography:

Bob Lang grew up in the college town of Kent, Ohio and began working with wood shortly after high school. His professional career began building speaker cabinets for professional sound systems, followed by a few years repairing wooden boats on Lake Erie. An apprenticeship in a commercial cabinet shop in Cleveland followed a stint as lead scenic artist at an aquatic theme park. In the 1980s, he designed and created furniture and accessories, and exhibited his work at art shows and galleries across the country. He returned to the world of professional cabinetmaking in the mid-1980s, until he joined the staff of Popular Woodworking in 2004. Along the way he owned his own shop, worked in a number of shops creating high end work for the residential and commercial markets. He rose through the ranks and at the end of that phase of his career, he was managing and engineering projects that ranged in scope from individual pieces of furniture to multi-million dollar interior projects. His first magazine articles appeared in WoodShop News and Fine Woodworking in 1999.

Bob Lang left the staff of Popular Woodworking in 2014 to work independently. He currently carves and builds furniture in Cincinnati, Ohio and writes about and teaches woodworking and 3D modeling with SketchUp. In January 2018 he became the editor of “American Period Furniture” the annual journal of the Society of American Period Furniture Makers.

Bob’s printed books are among the few woodworking books published in the last 15 years to remain in print. His philosophy in publishing is the same as it is when building furniture, make something of the finest possible quality, and build it to last.

The process of making things from wood is a special one, and I have been blessed to spend most of my adult life with better craftsmen than I; learning, making and sharing what has been shared with me.