It’s been an interesting summer to say the least. For the first time in years my wife and I planned a vacation; a two week trip to the island of Ibiza, Spain for the marriage of my son and his wonderful bride. I juggle several different things to make a living, so it seemed simple enough to rearrange things. Working independently however means I need to answer the door when opportunity knocks. Shortly before we left, a customer placed an order for my version of the Gustav Stickley Poppy table. Upon our return I had to fight off the jet lag and get busy. I vary a bit from the early 20th century original. The original’s legs are a bit thinner, the detail at the bottom of the legs is different and I get a little carried away with the carving on the top and shelf. My goal is to make as nice a table as I can and I’m not out to fool any collectors, so if you’re a purist it might be better to call it an interpretation instead of a reproduction. In addition to the stylistic changes, I also improved the piece structurally.

In the rare original versions of the Poppy Table the legs are simply screwed into the shelf and the top and legs connect with glue blocks. That leaves things a bit wobbly. I don’t want to invest all the time it takes to produce this and wind up with a shaky little table. I cut mortises into the edges of the shelf and the back of the legs with a Festool Domino machine and insert a loose tenon. The tenons are glued into the shelf and after the glue dries a screw pulls the leg side of the joint tight. A matching plug covers up the counter-bored hole for the screw.

Up at the top, my inner engineer devised the system of a pentagon shaped hub, with stretchers radiating out to the legs. Lapped dovetails hold the pieces together. This is practical joinery, so the tails and sockets aren’t the prettiest that you’ll ever see. That’s okay because once the top is attached to the stretchers with pan head screws none of the joinery is visible. Dovetails are first and foremost a practical way to hold two pieces of wood together. There are plenty of other places on this little table to focus on cosmetics. 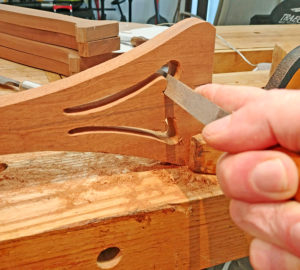 There are only a few straight edges in this piece — the tops and bottoms of the legs and a short break between the lobes of the shelf where the legs attach. Everything else is curved, cut to a paper pattern on the band saw where possible, and with a scroll saw for the interior cuts. For things to look good in the end those surfaces need to be nice and smooth. Rasps are used to remove the saw marks and files, scrapers and Abranet sandpaper are used to make the curves as nice as the flat faces which are planed and scraped. If you could straighten out all the undulating curves you would discover that there are miles of edges to process. My brain fails to recognize this before starting, but it doesn’t take long to realize that this takes a lot of time. 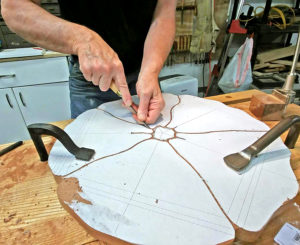 The lines carved in the top of the originals are a simple “U” shaped profile. I start to carve with that in mind but I reach a point were I decide that doesn’t look very flower-like. I prefer a softer edge, so the walls of the grooves get rounded over to blend in the the flat surfaces of the top and shelf.

I glue down a full-size printed pattern and do the initial carving through the paper. I use a spray adhesive to hold paper to wood and remove it as the work proceeds. For years 3M Super-77 was my go-to for this task. The problem with this adhesive is that it’s too good — if you leave the paper on very long it starts to act like a permanent glue. A couple of years I go I stumbled across Super-75 which performs well, but doesn’t grip quite as tenaciously. With either version the adhesive can be released and the surface cleaned up with paint thinner/mineral spirits.

The carving is pretty basic, but it is a good exercise in dealing with changing grain directions. Four of the five divisions between the lobes present a different direction to cut across the grain. One goes with the grain (mostly) but it too snakes back and forth from the center to the edge.

The edges also present different grain directions around the perimeter of the top. In some places it’s long grain, some are end grain and the wood is always in transition. To achieve a nice finish the texture of all these surfaces needs to be consistent. For a little table there are plenty of challenges.

For the finish I use Watco Danish Oil. I add a bit of Walnut colored oil to the Natural oil for the first coat, then the Natural only for succeeding coats. I used a non-woven abrasive pad (Skotchbrite) for the first coat and keep that coat wet for 45 minutes to an hour, wiping more oil onto parts that start to look dry. When it looks like it’s done soaking in I wipe the surface completely dry and get the rags I used outside. I drape them over the edge of the trash can so that any of the finish in the rags will evaporate without spontaneously combusting. Burning down the shop with an oily rag fire could ruin your whole day. I keep an eye on the finish for an hour or two to wipe away any little spots of oil that seep out of the pores of the wood. If those spots dry on the surface it leaves shiny spots that aren’t easy to remove. 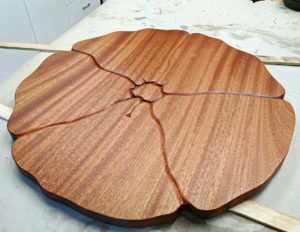 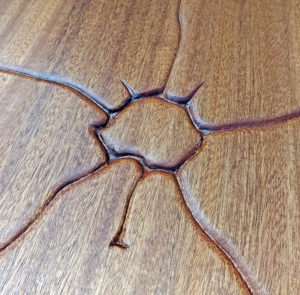 Here’s what the top looks like after a few coats, along with a close up of the center of the carving. In a couple of days I’ll have the finish where I want it to be and I’ll screw the top back down and ship it to my customer.