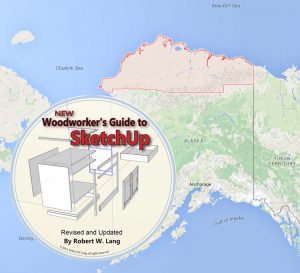 The good thing about running an online business is extended reach; folks from the other side of the world purchase and download my book the “New Woodworker’s Guide to SketchUp” all the time, usually without a hitch. Once in a while there is a problem with an online purchase, the download process or getting the embedded videos to function. I do my best to resolve those issues and I’m almost always successful.

Last week I had a customer who experienced trouble with both the purchase and the download. His first e-mail mentioned that he lived in Alaska and didn’t want to wait for a disc to arrive via mail. The second mentioned that he was on the north slope and “our internet service is poor to say the least”. He was prepared to use his phone as a hot spot for the download, so we gave it a try. Going through my normal server showed a download time of five days on his end, so we tried plan B. A couple of days later I received this message:

Good Morning,
I got the file and all is well.  I’ll pass along a few tidbits in case this might help someone else.
I used my cell phone as a Hot Spot and with all of the attempts that used a little over 6 GB of data.  The successful download took a little over four hours.
I have a new Lap Top.  It did not have Adobe Reader installed.  Also Win 10 is supposed to have Flash included but that would not play the videos.  I had to install Adobe Reader and Flash from scratch.
My Tablet, at first would not play the videos.  I installed the “ezPDFReader” app, which is loaded with features and so far that is working very well.  The trial version only lasts 15 days and the PRO version is $3.99.  I really like it so far and it even works on my phone.  Obviously the phone is rather small to say the least, but I have found that very handy when I can not use a larger device.

I am very impressed with all of the work you put into the material.  The reading material is very informative on its own but the videos really put the icing on the cake. I worked through the first four chapters yesterday and have learned a lot in that short time. I need to change my mind set from all of the years of working with Photo Shop, other Adobe applications and Drawing programs.  Just your first four Chapters were a huge step for me in that direction.

Bob, thanks for all of your extra effort in helping me to be able to download this file.  By having this next week to work with it, well, this will save me about three weeks.

Have a GREAT Day!

When I asked if he minded my sharing his message online, he replied with this:

Over the years I have been self-taught for a large number of programs.  Those have included video editing, drawing, cad and the various office products.  A few years ago, I tried that with Sketchup.  That did not work out.  Mostly I got confused and frustrated.  Just recently, I decided to give Sketchup another try.  Again, it was a rather frustrating experience. I found several so called instruction e-boooks, dvds, etc., on line.  It was easy to see that most of them were like so many I have run into in the past.  You pay a few dollars, read or watch for a few minutes and wonder why you wasted your time and money!  Then I found your website.  I spent several hours reading many of the posts and found a lot of well-organized and useful hints and pointers.

You have dangled some tasty bait on your website so I bit the hook and ordered “The New Woodworker’s Guide to SketchUp.”  WOW!  You have combined the most basic elements of instruction that are all but forgotten today. Anyone that has gone through “Death by Power Point” will know what I am referring to.  You start by telling us what you are going to tell us.  Then you tell us what, where, when, how and why. Next you show us with the video.  Lastly, we get to practice as much as we want or need.  This is like a hands on class room only better.  Unlike a class room, one can progress at their own pace and repeat or review as often as they desire. 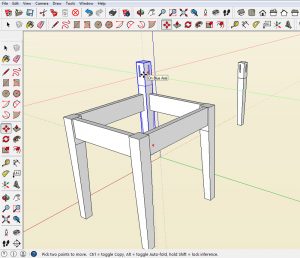 Let me relate one example.  In Chapter 6 one is to make a tapered leg.  A simple enough procedure?  Well not really.  Years of working with programs such as Photo Shop, After Effects, etc., one is well practiced at click on the object and drag with the mouse.  With Sketchup, that use of the mouse will often lead to super frustration.  One has to change old habits and mind set.  There are a number of functions covered in each video and I missed the concept of “click anywhere and release” the  first couple of times due to the well-entrenched mind set from the past.  Finally, “I think I am getting it.”

You mentioned that this format is not widely accepted.  I think it is time others wake up and smell the roses!  But then I can relate to this.  Years ago I put together a video catalog using Access and several Adobe applications.  That turned into a onetime deal as the concept was not accepted then either.

Having been there – done that so to speak, I can appreciate all the knowledge, time and effort you have put into this. When compared to a lot of the “Junk” out there, $35 bucks seems a bit steep.  When one gets to see the usefulness and quality of your presentation, it is a real bargain.

Well, I got a little windy as usual.  I just wanted to let you know, at least one person appreciates your time and effort.

My thanks to Harry, and all of those who have purchased the “New Woodworker’s Guide to SketchUp”. If you are curious about what’s in the book, this post contains a video preview of the contents, and you can read more posts and reviews at this link.
—Bob Lang