Tilting in one direction doesn’t cause many problems.

What do middle school students and amateur carpenters have in common? Neither group realizes how tricky and troublesome compound angles can be. Carpenters will have fits trying to run crown molding and one group of middle schoolers recently hit a snag with making a model to 3D print. In SketchUp, the Push/Pull tool quickly makes 3D objects from 2D shapes, but there is a catch to using it. Push/Pull only extrudes on a 90-degree angle, and our middle-school designers ambitiously want a truncated pyramid. The pyramid is shown in the video below, but first I want to show what happens when you tilt nice rectangular forms in two directions.

In the image at right we have four square posts placed on top of a square surface. If we rotate one of the posts 15 degrees in, part of it goes through the square. That’s easy to trim; imagine this is a table leg and the square is the floor. Cut the end of the leg off at the angle and it sits flat on the floor, and it lines up nicely with the other legs. 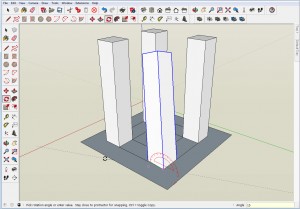 Tilting in two directions compounds the angle, and the problem.

When you make a pyramid, the corners rotate at two angles, and that creates problems you might not realize. On the square in the image I drew the footprint of where the bottoms of the legs were when they were vertical. The edges stay in line when you only angle one direction.

When you tilt in two directions however, things get weird. It’s hard to visualize what exactly happens so I used SketchUp to show the intersection of the twice-tilted leg and the floor.

If you’re playing along at home, I made each leg a component and I also made the square on the floor a component. They could also be groups, all I needed to do was keep things from sticking and stretching as the legs tilt. 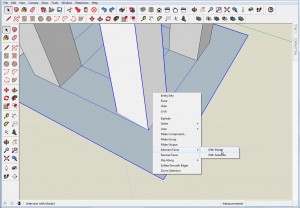 I selected both the tilted leg and the square, right-clicked and selected “intersect faces/with model” from the context menu. SketchUp then conveniently added the outline of the intersection where the leg passes through the floor.

If this were a table or a chair, that intersection is the compound angled cut that we would need to make to have the bottoms of the legs rest solidly on the floor.

You can see in the image at right that the edge of the leg no longer lines up with the outline drawn on the floor. The image below shows just the intersection as seen from directly above. 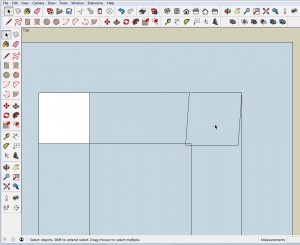 If we tilt all four legs, things get really interesting. If we connect the bottoms and tops of the legs with beams, those shapes become even more interesting. If we’re trying to model all of this with Push/Pull, we are headed for heartache because extruding at 90 degrees doesn’t do us any good if the resulting angle is really 88.5 degrees.

That doesn’t mean we can’t make compound angled objects in SketchUp, it just means that we have to use a different strategy and different tools.

In the video below, you’ll see how I approached making the truncated pyramid frame solid enough to 3D print. If you have a better, faster or more elegant way to accomplish this task, leave a comment below.