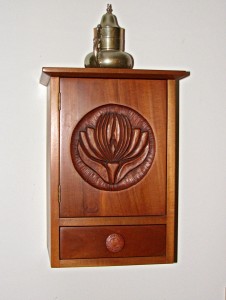 When you reach a certain age you find yourself becoming more careful about some things, but not giving a hoot about others. There are a lot of interesting things I could pursue, but I find myself deliberately avoiding some new things (rendering 3D models and 3D printing for example) because the list of older things I haven’t explored as much as I would like to is pretty long. I have too many reminders (and too many partially finished projects kicking around) that life won’t be long enough to do everything I want to do.

I’ve put down and picked up carving several times over the last 20 years. That’s about how long it’s been since I made the little cabinet on the left. It’s made out of poplar (with some serious coloring) with a stylized lotus carved in the door. The inspiration from this began with my exposure to the work of Zulma Steele and Edna Walker at the Byrcliffe colony in the early 1900s. You can read about how that started in this earlier post. The lotus blossom is based on a Harvey Ellis linen design, similar to the designs he created for inlays on Gustav Stickley’s furniture.

Where I get into trouble is one thing always leads to several more. A spark of an idea gets some oxygen and it becomes a flame that might spread out of control. My interest in Arts & Crafts furniture inevitably led me to Harvey Ellis and the Byrdcliffe colony. The trivial thought of “maybe I should learn to carve” spiraled into “what if other designs from the period became carvings instead of graphics?” Twenty years ago it was easy to let these ideas slide. Now with the resources available online, chasing down these notions isn’t that difficult. What takes time is all the “what if” questions that come along with the information. 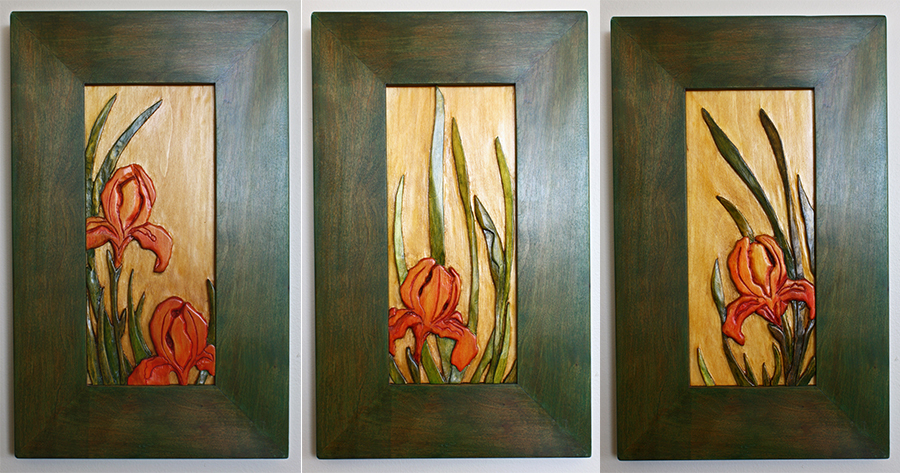 I carved these three panels to be framed individually, because I wanted to see if each of the panels could stand alone. I think they do, but I’d also like to have a version as a triptych, as they appeared on the desk. I could pop out the panels and build a single frame, but it would be nice to compare them side-by-side. I also tried to match the original colors in this set, but to my mind the better color for an iris is more purple and blue. I already have a couple of the carvings pretty far along; ones I used to demonstrate during the class, so it wouldn’t be that big of a deal to go ahead. I can use the practice anyway.

But that’s just the tip of the iceberg. While researching the desk I came across a bunch of original designs from Byrdcliffe that are worth trying. And that’s just Byrdcliffe. I’ve carved a couple things based on Harvey Ellis designs, but didn’t add any color. Several of those might look pretty good too with some color added and Harvey seemed to be able to shake them out of his sleeve. And that’s only a few of the great designers from the period. What about Charles Rennie MackIntosh? What would his graphic designs look like carved and colored? That last question led to some action, seen below. 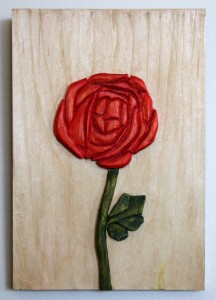 That’s a test piece, a proof of concept. It’s a snippet from a much larger stencil design. Now I’m imagining a bunch of other carvings based on MackIntosh’s stuff. My wife tells me the color isn’t quite right so I’ll need to do another one (or two or three or four) to see if she is right, even though more that twenty-five years of experience in that realm tells that that of course she’s right. She also has her own ideas for colored carvings, and they sound pretty good too. Add them to the list.

So I better take care of myself so that I live long enough to try as many of these ideas as I can. It’s a lot of fun and I think these are great things to hang on the wall. And I need to figure out what to do with the overflow.