Furniture from the American Arts & Crafts period is extremely popular, but it is also misunderstood. We’re not even sure what to call it. Is the correct name Mission or Craftsman or something else? Much of the confusion comes from what has been written about the period. There is a lack of diligence in research on the one hand and motives for profit on the other that require the student of the period to read carefully. Readers expect facts, and writers are supposed to provide them. No one is really happy with “we can’t really say for certain” but most of the time that is the best answer we have.

I used to think that history was easy, but written history is more about opinions and guesses than it is about facts. The key players in the development of Craftsman furniture designs are known, but the exact roles they played, and their relationships to each other are not clear. An obvious example of this is the relationship of Gustav Stickley and Harvey Ellis. Over the years the work of each of these men has been ignored, rediscovered, lionized, exploited, then minimized. Gus and Harvey were both complicated and talented men. They had a lot in common, each had a great influence on the other and they worked together for several months in 1903. The resulting furniture is the high point of American Arts & Crafts furniture.

Today, both men are best known for furniture, but their talents reached far beyond that. Like an accomplished musician who could play well in any style, Harvey Ellis created great designs ranging from small decorative inlays to monumental buildings. In addition to his creative genius, his skills at presenting his ideas were unmatched. 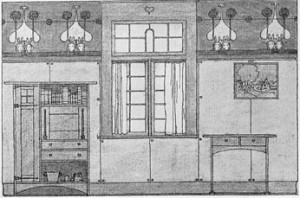 This pen and ink illustration for The Craftsman magazine is one of my favorite examples of Ellis’ work. The drawing as a whole is a wonderful composition, and as you look closer each element within is also fascinating. The furniture is functional, attractive and innovative. The motifs on the frieze above foretell the inlays that would later appear on Stickley furniture, and the sketchy painting above the table is interesting as well.

Ellis was described by a friend as having art like this flow from his hand in a “maddeningly simple” way, and most of his illustrations in The Craftsman are equally rich in detail and diversity.

In the December 1903 issue of The Craftsman, Ellis wrote an article titled “The ABC of Decorative Art”. The article is well worth reading for it contains some of his ideas on composition, the role of nature in design and the similarity between harmony in music and harmony in design. Sadly, this article was an introduction to further articles that were never written. As the issue reached subscribers, Ellis’ health was failing, and he died in January of 1904.

The illustration at the top of this post is one of the Harvey Ellis inlay designs from my book “Shop Drawings for Craftsman Inlays & Hardware”. In addition to the inlay drawings, the text of that book contains a biography of Ellis, and a discussion of his role in the work produced by Gustav Stickley.

Click Here to read “The ABC of Decorative Art” from The Craftsman magazine.

In the coming weeks, you’ll see a complete bibliography of the Harvey Ellis contributions to The Craftsman on this website.