I like to say that behind every good piece of furniture is a good story. The same is true for books. My first book “Shop Drawings for Craftsman Furniture” took about 20 years to go from idea to completion. My latest, “Shop Drawings for Byrdcliffe Furniture” has be percolating since the summer of 2012, but I may have considered it when I built a reproduction of the Sassafras Linen Press in 2006. What follows is an article I wrote in 2014 for the short-lived 360Woodworking. Due to the length of the article it will be spread out in two or three parts. If you’re patient enough to make it to the end of this post, you’ll find a link to your opportunity to be one of the first to get the new book.

Here is part one of the article: 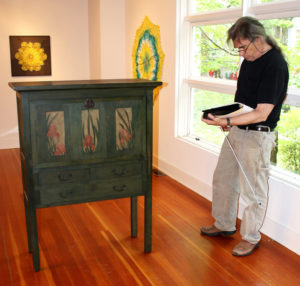 It started innocently enough. A couple of readers on my blog suggested that I teach a class on building the Byrdcliffe linen press, a project I built for the cover of the April 2006 issue of Popular Woodworking. That large cabinet, with carved and colored sassafras leaves on the doors and green-stained quartersawn white oak is one of my all time favorite pieces of furniture. But I recognized that it would be too much to tackle in a week-long class.

Almost immediately I thought of the Iris desk, another Byrdcliffe piece that is similar in many ways to the linen press, but considerably smaller and with simpler carving. Like the linen press, the desk is stained green and the carved panels are colored. Unlike the larger piece, the desk is made of cherry. I went on line and started researching, and made the happy discovery that the Winterthur Museum has many original drawings from the Byrdcliffe colony.

In the world of American Arts & Crafts furniture, the output of the Byrdcliffe colony was but a spark. The cabinetmaking shop was in operation for less than two years and only produced about 50 pieces of furniture. What sets these pieces apart is that they were a collaborative effort of the artists in residence at the colony and the craftsmen in the cabinet shop. Adding artistic decoration to furniture is difficult to do well, but the Byrdcliffe designs do it in grand style, a wonderful blend of good proportions and subdued decoration. This small group contains some of the most interesting and captivating designs of the period.

Despite its idyllic setting and lofty goals Byrdcliffe wasn’t the most peaceful place. Started as a utopian arts community in 1902 by Englishman Ralph Radcliffe Whitehead and his wife Jane on 1500 acres just outside Woodstock, New York, most of the artists were gone by 1915. Whitehead was from a wealthy English family, the family fortune came from the ownership of a manufacturing mill that produced felt for piano keys. 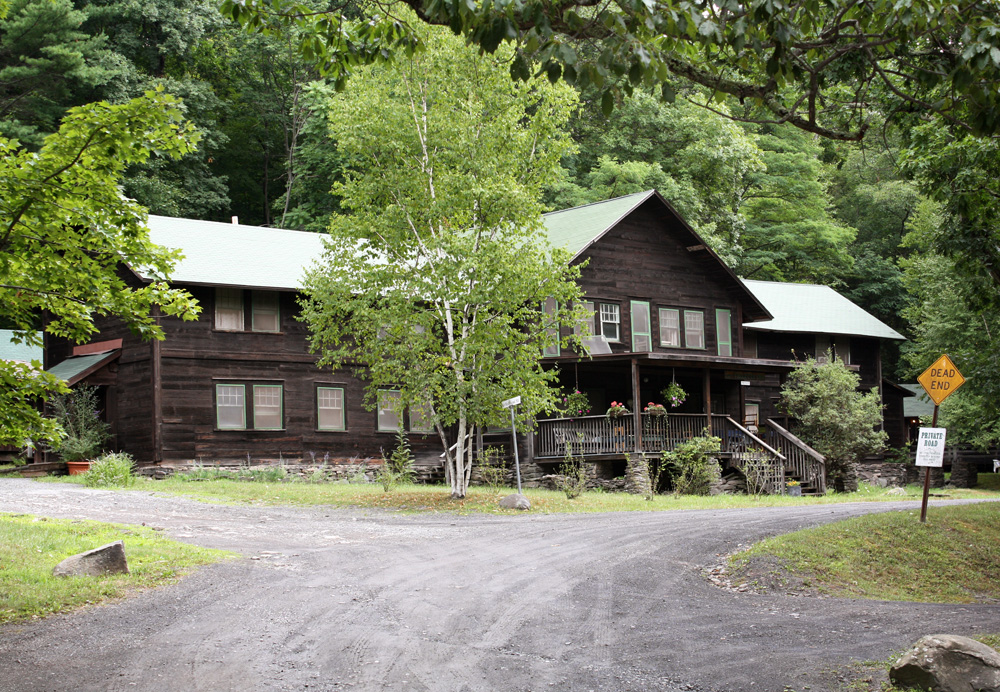 Several of the original buildings of the Byrdcliffe colony are still in use, surrounded by the woods in the hills above Woodstock, New York. The colony is now owned by the not-for-profit Woodstock Byrdcliffe Guild. The guild hosts artists-in-residence programs and educational uses at the original site

Ralph went off to study at Oxford and became a follower of English Arts & Crafts pioneers John Ruskin and William Morris. When he returned home from school ready to take his place in the family business, other family members were taken aback by his talk of the dehumanizing affects of factory life and the glorious days of craft guilds. Essentially they paid him to stay away from the business.

He spent several years touring Europe, studying art and living a gentlemanly life of leisure. He had a keen interest in the arts, and loved the company of artists but didn’t possess much talent himself. Some accounts suggest that he “apprenticed” with a German cabinetmaker during this period, but the apprenticeship amounted to a few months of afternoon instruction from the master after the cabinetmakers had gone home for the day.

After marrying Jane, the daughter of a wealthy Philadelphia family, the couple settled in California before purchasing land in New York in 1902. Some 30 buildings were constructed and a number of artists and writers moved in. Within a year or two several of the original artists moved out. What apparently caused a rift between the freedom-loving artisans and the colony’s founders was the Whitehead’s desire to micro-manage and orchestrate activities on a daily if not hourly basis. 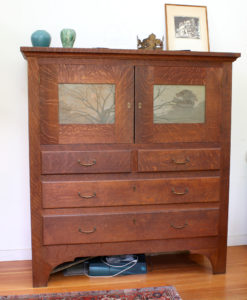 This linen press features painted door panels, and may never have been finished. Part of the scheme was to wait for a piece to sell, and let the buyer select a color.

Among the original drawings now at Winterthur are sketches of several cabinets similar to the one in the photo at right, and the linen press. Different artists made their interpretations and several of the cases were made, some with painted panels and some with carved panels. Among the longer-term residents at Byrdcliffe were Zulma Steele and Edna Walker, who had studied with Arthur Wesley Dow at the Pratt Institute of Art in New York.

Walker designed the sassafras leaf panels of the linen press, while Steele produced the drawings for the panels in the Iris desk. It isn’t clear who created the actual furniture designs. Whitehead is credited by some sources, but there isn’t any hard evidence for that, although he certainly had considerable input in the process. Several of the drawings at Winterthur are labeled “Ralph Whitehead personal copy” and many show evidence of having been used in the shop; mainly hand-written notes about dimensions.

In 1904 it was full speed ahead for the furniture shop at Byrdcliffe, but the shop was closed in 1905 the year after the Iris desk was made. The most common reason given for the closure was the inability to make a profit in this branch of the enterprise. That makes sense on the surface, but there really weren’t any money makers at the colony. 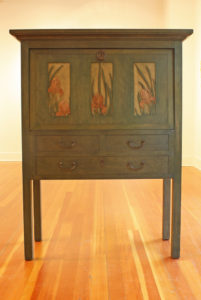 Most of the desk is made of cherry, but the carved and colored front panel is poplar. The overall design is a wonderful blend of function, proportions and decoration.

My theory is that the cabinetmakers and Whitehead didn’t get along and the workers either left in frustration or were asked to leave by an equally frustrated and demanding patron. My theory is based in part on statements from Whitehead on the superiority of designers over craftsmen. He thought workers of a coarse nature who needed to be watched lest they spoil the designers work. (Note: This isn’t quite true – I made the mistake of quoting another author who published a misleading quote from Ralph Whitehead. I clear this up in the introductory chapters of “Shop Drawings for Byrdcliffe Furniture” RWL)

The roots of my theory took hold after I saw the desk for the first time in person. While it is as nicely proportioned and beautifully rendered as it appears in photographs, there is a fatal flaw in the construction that to me represents an argument lost by a competent cabinetmaker and won by an overbearing patron with the sense to engage a great designer, but without a basic understanding of the material. It is a shame that this wonderful design was doomed from the start. The panel that is the focal point of the design was built to self-destruct.

A Long Trip on Short Notice 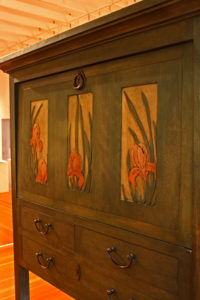 The shallow relief carvings were designed by Zulma Steele. The surfaces of the carving are quite flat, similar to wood-block print carvings.

As I dug deeper into online images of this desk, I realized that I was also digging myself into a commitment to build this piece. I knew that it still existed, but I wasn’t sure where it was. A couple of photo credits led me to the Woodstock Guild, so I sent an e-mail asking if they still had the desk. What followed was a quick and hospitable exchange; yes they had it, they asked if I wanted to come see it and they didn’t mind if I brought my camera and measuring tools.

I have had the opportunity to see some significant pieces in person, but never without serious restrictions. Usually photography is out of the question, or limited to no lights, flash or tripods. Sketching is OK, but no touching or measuring is allowed. It seemed to me that an opportunity like this should not be wasted, so I decided to take a trip as soon as possible. I went home to ask my wife if she would be interested in a long weekend trip to the Catskills.

Along the way, I thanked her for her patience, understanding and cooperation, mentioning that a lot of wives would have said “You’re crazy, what a ridiculous idea to drive 1500 miles to see one piece of old furniture”. Her response was this “well, I know you’re crazy, I guess I’m used to it by now.” 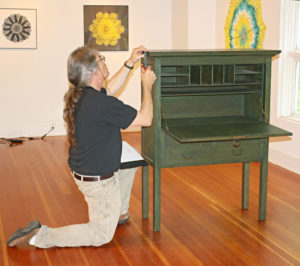 I was fortunate to be able to study the desk for the better part of a day, comparing dimensions to the scaled drawings from the Winterthur museum.

When we arrived in Woodstock, the staff of the Guild couldn’t have been nicer. They moved the desk from their executive director’s office and placed it in their gallery. They helped move it closer to the windows for better light and they let me pull out the drawers, crawl underneath and measure all the bits and pieces. Before I left home, I downloaded an elevation and patterns from Winterthur, and used those to create a SketchUp model.

From that model, I printed un-dimensioned elevations and sections so that I wouldn’t have to waste time on site drawing; I could measure and record the dimensions on my rough drawings. I wanted to be prepared to document the desk efficiently, but in spite of my preparations, I was in for a big surprise.

Part two of the article will appear soon. In the upper right corner of this webpage you can subscribe to this site either through an RSS feed or by email. I don’t share your information with anyone-ever and I’m one of the world’s worst email marketers. You will get notified when new content is posted to this site, and once or twice a year I send out a newsletter.

Okay Bob, what about the new book, like you promised?

“Shop Drawings for Byrdcliffe Furniture” is in the process of being printed, and signed copies of this book will be available directly from me in a few weeks. If you want to be among the first in line for a print copy, you can do that here. While you wait for the print book, you can enjoy the PDF version at no additional cost. If you want to explore the carving designs of Byrdcliffe, you can add a PDF of the patterns to print them at actual size.