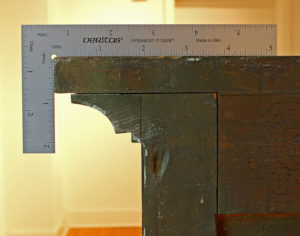 This single picture says a lot about the person who built this piece and how he made it.This image is looking at the back of a case piece.

I’m working on a new book project, but because I’ve been at this one for several years now it doesn’t feel so new. In any case I’m approaching the finish line (excerpt for figuring out how to publish it). I take history seriously. I feel a responsibility to get the facts right, although I believe that puts me in a minority of writers. If I have to guess I’m okay with saying “this is my best guess because . . .”) and if it’s a situation where no one really knows I say so. Writer’s are told to use an “authoritative voice”, and saying “I don’t know” or “here’s a guess” breaks that rule. I’m not trying to dump on any other authors but I’ve been going over everything I can find on my topic. It reminds me of how I felt while working on my first book “Shop Drawings for Craftsman Furniture”. Here’s an important area of our cultural history and no one is doing a decent job of recording how this stuff was really made so maybe I should do it.

When you read thoroughly about a particular topic you realize how much authors depend on earlier authors and how often they repeat what someone else wrote. If you read from latest to earliest you can track ideas and generally accepted facts back to their origin. Bob Flexner has done a lot of this with finishing information and believe it or not there are authors who make stuff up that sounds plausible and there are editors who either don’t care or can’t tell the difference between good information and BS spoken in an authoritative voice. Because a couple of my sources have proven to be suspicious to me I’ve had to go back as far as possible, and it has taken me additional time, but that’s alright. It’s essentially the same process as checking a measurement one more time before cutting a valuable piece of material. 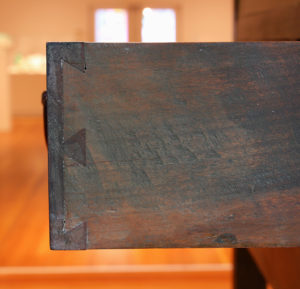 This drawer won’t win any beauty contests but it has held together and functions well after more than a century.

I’ve been fortunate to be able to take a close look at old and special pieces of furniture. Because I’ve spent a lot of time in various shops making various things I often get a sense of what the guy who made it was thinking. In this piece the maker was pretty talented, but was either in a hurry or didn’t have his heart in the project. But that doesn’t mean the end product isn’t a masterpiece. I spotted a few things that some would consider flaws, but none were noticeable when looking at the piece in its entirety from a normal point of view — I had to get out my magnifying glass and look from an angle from behind or below. I spotted a repair that I’m sure was unnoticeable for a long, long time. I could only see it from down on the floor, looking up at just the right angle. It was an elegant fix to a mistake I’ve made and seen others make. I could imagine the language when the damage became obvious and I admire the repair, which saved time and material. I wonder if he showed off his solution to his shop mates, or kept quiet about it so he wouldn’t have to admit he had done wrong. I don’t have any idea which way he went, but my best guess is he spent some time considering the alternatives.

They don’t cover this sort of thing in art history classes, and they don’t mean a thing to the collector’s market, so you rarely see things like this mentioned in print . But the woodworkers I know (who are a bit nutty about old furniture) love to consider these things. Because we’ve spent time in the shop we understand what happens along the way from a good design and a pile of lumber to a finished piece of furniture. We know the mistakes that can doom an otherwise great design to eventual destruction and the difference between a piece of furniture that received care and attention all of its life and one that was stashed away in a damp and gloomy place.

Your mission, as a reader is to leave a comment with what these two pictures tell you about this piece of furniture and the guy who made it. Wild guesses and conjecture are expected and appreciated.