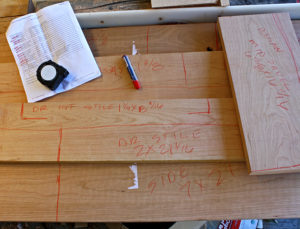 Early in my career I was told by the man who hired me “we’ll teach you to think like a cabinetmaker”. Apparently that worked, and since I’ve transitioned from full time woodworking to writing about woodworking, I feel compelled to throw the BS flag every now and then. In preparing for a class last weekend at the Marc Adams School of Woodworking I spent a few hours preparing my materials. It’s tough to cover everything in a two day class, and I realized that telling students to show up with materials close to the finished size might omit an important lesson, especially if they’ve been reading too much.

The choice of “what piece of wood goes where” makes or breaks the appearance of the finished piece and writers who provide a chart showing how to get all the parts for a project from one or two 1 X 6s do their readers a disservice unless the piece is to be painted. Like our children, trees are individuals and you can’t just put any piece in any position. Some boards (or portions of boards) are best suited to be the stars as panels or case sides, and others are better suited for supporting roles. My opinion on how good a piece of wood looks depends on where I want it to go. In the picture above, I’ve been through my cutlist and roughly marked the destination and dimensions of my parts. 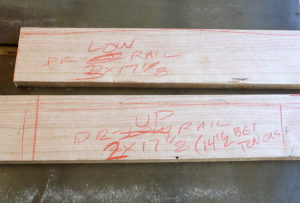 I don’t want to spend too much time on this step because time = $$$ was a large part of my training, and a larger part of my career. So the marks are close to the final size, but bigger. How much bigger can’t be precisely defined, it depends on the boards available and the locations of the less attractive parts. I use a lumber crayon or piece of chalk and don’t worry about precision. I want easily visible marks that can’t be mistaken for something else and an indication of the rough size.

In the picture at left the close, tight grain is the appropriate choice for door parts. Marking with a crayon is not the same as carving in stone, and you can see where I changed my mind about which piece belonged on the top of the door and which one should go on the bottom. After deciding I make rough cuts so I can see how the individual pieces will look next to each other. These relationships will be permanent, so it pays to compare before committing. 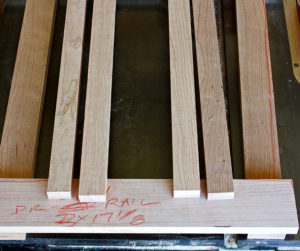 The picture at right shows an example of considering the alternatives. This door has three panels; two narrow panels flanking a large center one. The panels have some nice cathedral grain, and I want the straightest stuff I have for the narrow intermediate stiles. Straight-grained material is more  stable than wood with more variation in the figure. If you look at old furniture you see that cabinetmakers have thought this way for a long time. It does make me wonder if I think this looks good merely because of appearance, or if the stability of the parts that need to stay straight influences my judgment.

Of the four candidates for the intermediate stiles, the two on the outside are rejects. The wild grain on the piece on the left doesn’t look right; it’s too similar to the figure of the panels and doesn’t fit in with the other frame parts. The grain is tighter in the piece on the right, but it slants off to the right. This is a visual composition and I want the pieces to look like they belong together. 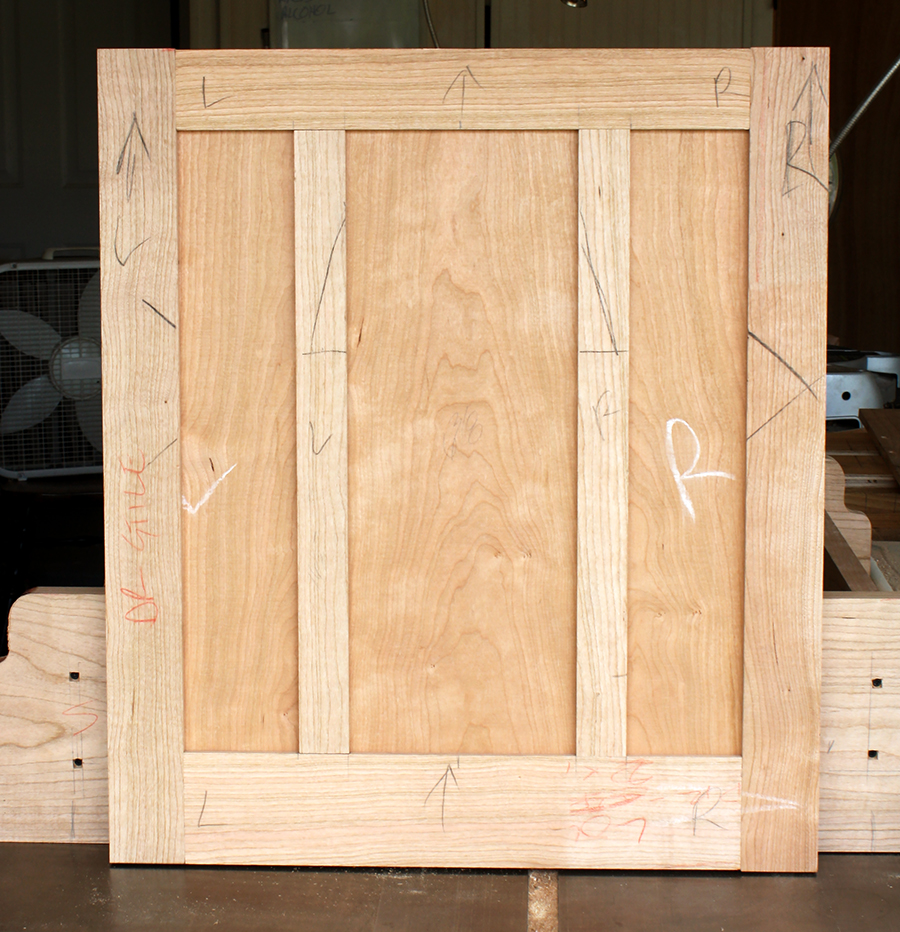 It takes time to get everything arranged just so, and if I don’t make an effort to preserve the arrangement, the investment in time has been wasted. Each piece has its place, so as I work I add more marks to keep me from putting one or two pieces in upside down or backwards. In the photo of the rough assembled door at left, the black marks were made after all the pieces were cut to size and before the mortises and tenons were cut.

Twenty years from now I want to look at this door and say “that looks pretty good”. That will be a lot more satisfying than looking at an ugly door and saying “I am glad that I managed to avoid buying an extra board”. Now it’s time to take it all apart and make it look pretty before I glue it together.