Making jigs (and writing about making jigs) is a popular topic. So popular that some woodworkers (and some authors) spend so much time creating jigs that they never accomplish much of anything else. I’m not one of those guys. I’m not against jigs, I see them as a means to an end, not an end themselves. Today I needed some small tapered parts and made a jig to cut them at the table saw. I didn’t want the ultimate micro-adjustable, super flexible jig that can do anything, I wanted to spend a minimal amount of time to put something together that would let me safely and repeatably cut two specific tapers. My goal is to duplicate a frame I made a few weeks ago. You can see a picture of it here. 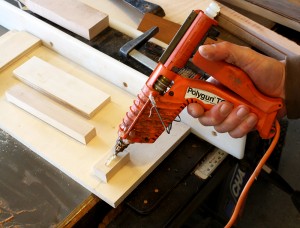 Two of the parts are about 10″ long and taper along one long edge. The other part is about 12″ long and tapers from the center down to both ends. I began by laying out the angled lines, as I would do if I were to cut the tapers on the bandsaw. I cut a piece of 1/2″ thick plywood about 18″ long and ripped it to 7″ wide. I left the fence on the table saw set and placed my parts on the plywood, with the cut marks on the edge. I marked the other edge and the near end on the plywood, grabbed a few short scraps and plugged in my hot glue gun.

I bought this gun in 1992 for around $100 if I remember right. It’s a 3M Polygun TC with the Quadrack Converter and Palm Trigger. If you decide to get one, don’t be cheap and get the version without the converter and trigger. On this model the long glue sticks have little notches in them that get grabbed by the trigger and feed easily. If you go cheap there are shorter glue sticks that you have to push through the gun with your thumb. 3M makes several flavors of glue for different applications. I use the 3792Q sticks. The glue isn’t cheap, but it’s good stuff. I first came across this tool in a commercial cabinet shop where we used it to secure cabinet backs and drawer bottoms. In those applications the glue forms a strong fillet between two parts, and if you have your box clamped square, the hot-glued back or bottom holds the box square while the glue in the real joints dries.

We also used it to make jigs in a hurry. This isn’t your “crafty” hot glue gun. The adhesive holds very well, it’s actually a strong plastic that melts at about 400º F.  Because of the high temperature, you need to make sure to keep your fingers away from the molten glue. You don’t want to incur second degree burns from something that sticks to your skin. It takes a few minutes for the gun to warm up, and after it is applied you have about a minute to set the part in place. For my jig, I squirted on a dab of glue, flipped the part over and wiggled it into position on my layout line. 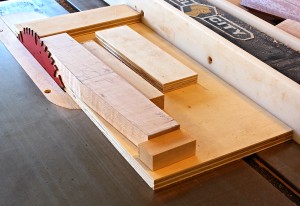 About halfway through making this jig it dawned on me that I could flip it around and use it to cut both parts. To reuse the jig (if the saw fence has been moved from its original setting) I place the edge of the jig against the saw blade, then move the fence over to the other edge of the jig and secure the fence.

The long stop holds the edge of the part, and the short one keeps the end from sliding back. If I’m running a lot of parts, I’ll screw down a hold-down clamp. For just a few pieces, I use a hold down shoe as seen in the next photo. 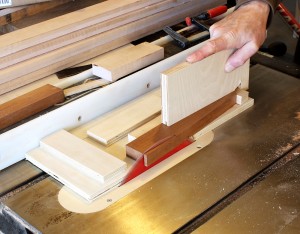 You can’t beat the table saw for making precise repeatable cuts. A sled such as this makes it possible to make parts safely when the pieces are small and not rectangular. The key is to make the base large enough that you can comfortably control the piece through the entire cutting process.

You can also make a sled that rides on bars in the miter slots of the saw. That gets fussier and takes longer to make, so I use the fence if possible. There are two questions to ask yourself when you consider whether or not to make a jig for a specific task.

The first is to consider the alternatives and how much time each option is likely to take. If it takes longer to make the jig than it would take to just make a part or two by some other method, there should be some compelling reason, like safety or accuracy to justify making the jig. Making a jig for one specific task doesn’t take very long. Planning, engineering and building one that covers every possible taper you might ever make takes a lot longer. In my first iteration of the frame, I didn’t bother with the jig because I was making a prototype. This time around I’m thinking more like a production person and less like an artist. 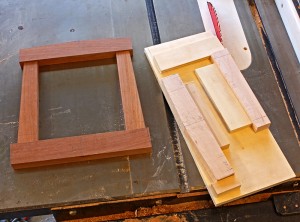 The second question regards your personal skill level, and this is where a lot of the multi-purpose micro adjustable, do-it-all jigs can let you down. If you don’t have the chops to do the work in the first place, it isn’t likely that you will be able to accurately make a jig to perform that task. Jigs can make the work safer, make it go faster, and make it repeatable, but they can’t give you skills you don’t have.

In this case, what I was after was to accurately cut to an odd line with a minimal amount of clean up at the end. There are lots of ways to do that. The more different ways you know how to cut to a line, the more problems you can solve.