The details that make the difference between furniture that is ho-hum and furniture that is WOW are most often subtle. If all you know about historical pieces is based on second hand information, you might believe that the way things are done in the magazines and online was the way they were performed “back in the day”. When you look close at original pieces you can see the difference. Greene & Greene furniture is extremely popular, but hardly anyone does a good job on the edges. Here is a quote from my book “Shop Drawings for Greene & Greene Furniture”, written in 2006:

What was missing in the woodshop of 1905 were the portable tools and abrasive equipment that are relied on so heavily today. The most significant tool missing from the Hall brothers arsenal is the portable router. All of the rounded edges we see in this furniture, and all of the carved and recessed details were shaped by hand. While a plunge router will speed the making of mortises, going at the edges of these pieces with a roundover bit and calling it a day will result in sterile, lifeless pieces that won’t quite look right. 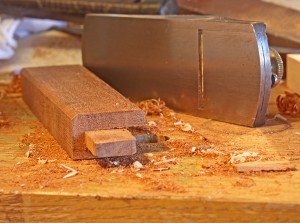 Step 1, chamfer the edge with a block plane.

I’m working on a small frame “in the style of” Greene & Greene and thought I’d take some pictures as I worked on the edges. What makes this style interesting and lively is the fact that while almost all the edges are rounded, the radius isn’t the same. It will be one size on one edge of a board and a different size on the other edge. When you reach the end of a piece there will be a different radius. These radii often change along the length of a piece and where one radius intersects another. Your router and roundover bits will let you down even if you own a zillion bits because of this variation and blending. But your block plane allows you to make any radius you want and you can easily make radii that taper along their length. 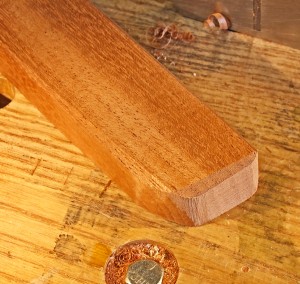 Taper by giving the wide end a few more strokes.

If you think you need a guide or a fence to make a neat chamfer or a specialized tool to make a round edge, put your credit card away. What you need is a little bit of practice. Set the depth of cut a little deeper than you would if you were planing a flat surface and balance the top of the plane on the edge. It’s easy to see if you’re close to a 45 degree angle, and close is all you need. Knocking off the corner is a very light cut so there isn’t any struggle.  You also don’t need any pencil lines to guide your progress, although it is a good idea to add a line here and there where going too far would be disastrous. In this piece, the horizontal rails are 7/8″ thick, and the tapered vertical stiles are about 3/4″ thick. The inner edges of the rails get a small radius that stops just before the intersection of the edge of the rail and the face of the stile. That’s the only place I used a line. You can see the progress you’re making and if it doesn’t look right, lean the plane for the next stroke or two and look again. You can introduce a taper by taking a few additional strokes on one end to establish the width. Then plane the entire edge to make one smooth tapered surface. 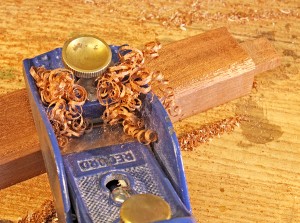 Skew the plane iron to get a variety of cuts without resetting.

When you have the chamfer established, tilt the plane some more to remove the corners where the chamfer meets the flat edges. That creates a faceted surface, so tilt the plane to remove the corners and before you know it the edge will begin to look rounded. This is all quick and easy because you’re only planing away narrow edges. I like to set up the iron in my plane with the mouth open and the blade skewed as much as I can get it. That enables me to get a rough cut using one side of the plane and a finer cut with the other. It’s easier to do this with an older plane than it is with newer ones that aren’t as sloppy. If you look back at the first picture you can see a wider band of light coming through the mouth opening on the bottom of the plane, and if you look close at the picture on the left (click on the photo for a larger version) you can see that the shavings on the right are slightly wider and thicker than those on the left. 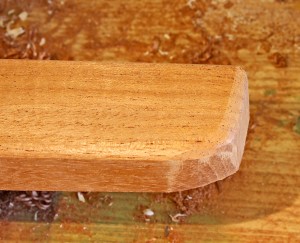 This is the end of the top rail. The top edge tapers from a peak in the center down to the end. The drop is about 1/8″, and as the edge approaches the end of the piece the radius gets larger. The end is also a tapered radius, and the two edges meet in a curve. If your block plane is pretty sharp it will form the curves across the grain almost as easily as going with the grain. As the curved shapes develop, roll the plane over the corner to blend the edges together. The photo at right shows about how far I go with the block plane on the end. Things are almost where I want them to be, but when a lot if end grain enters the picture I switch to a rasp. 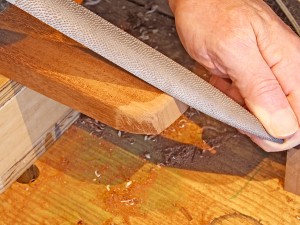 The rasp I’m using makes a middle of the road cut. It’s a #11 grain from Liogier. The curves have been established by the plane, I’m looking to remove any facets or bumps. I roll the flat face of the tool over the edge, going with the grain. The texture of the rasped surface is different from the surfaces produced by the plane, but that doesn’t matter at this point. When the edge is in good shape, I’ll follow up with a finer-grained rasp, then a scraper. The rasp (even the finest ones) leave a toothed surface. Scraping a rasped surface is fast and easy because the scraper is only shaving off the high spots between the cuts made by the rasp. I usually sand the entire piece at the end, beginning with #150 grit so that the surface is consistent before finishing. 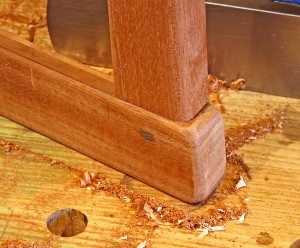 After working on individual pieces and as the end of the project approaches, I loosely assemble parts. What you see in the photo at right is one of the stiles assembled in the bottom rail. You can see the pencil line continuing to the left of the stile. The dark blob below the end of the stile is a penciled-in rendition of a square ebony plug. Things looked OK before the parts went together, but the curve at the top corner of the rail doesn’t quite work. I also decided that the curve at the bottom of the rail could also flow more gracefully. I made a couple of pencil marks on the rail, took the joint apart and went to work with my fine rasp. 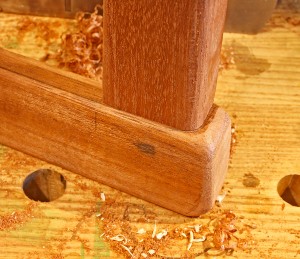 It doesn’t take long to make a small adjustment that makes a big difference in appearance. When you get to this point, resist the temptation to glue the thing together. All the pieces will get finish sanded before assembly. It’s a good idea to walk away for awhile and take a second look. Go get a cup of coffee and write a blog post first.

In a couple of days I should have pictures of the finished frame.