Navigate With the Mouse 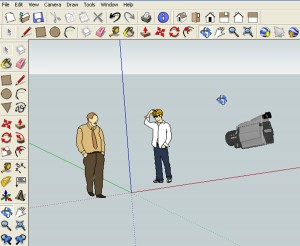 At SketchUp Base Camp I was in a group of people who teach SketchUp, and someone suggested that saying the program is “intuitive and easy to learn” may not be such good advice. It can be a real struggle at first, and one of my pet theories is that this is because you have to learn two sets of skills at the same time. You want to make stuff, but you need to be able to get around the modeling space to do do that. Learning to navigate is often the bigger hurdle. I spend a lot of time in my classes saying “zoom in so you can see what you’re doing” and “orbit around so you can see what you’re doing”. If you don’t get the hang of getting around, you won’t be able to work accurately or efficiently. It takes practice, but you should be careful about what you practice.

One of the things I encourage beginners to do, especially if navigating is awkward is to spend some time poking around someone else’s model. Orbiting and zooming in an empty model won’t teach you much. It is also important to recognize that the obvious way to do something in SketchUp isn’t always the best way. The tools on the toolbar are easy to figure out, the pencil draws a line, the eraser gets rid of a line and those magnifying glasses, the little white hand and the blue spinny thing will get you around. 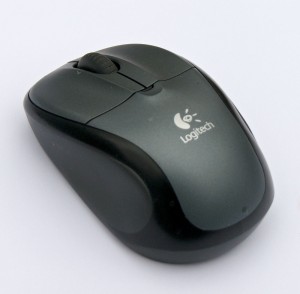 But the key to getting around isn’t on the toolbar or on a menu, it’s built into the scroll wheel of the mouse. Place the cursor over an object in the model and roll that wheel back and forth to zoom in and out. Placing the cursor is important, because the program uses that point as the center of the zoom. If your zoom command suddenly quits working, check the cursor location. If it’s is empty space, SketchUp won’t really know what you want it to do. Put the cursor over something and roll the wheel to get in quickly.

Push down on the scroll wheel and move the mouse around to orbit. Orbit makes it seem like you’re spinning the entire model around, but what is really happening is that you are moving a camera around. I caught on to those two features rather quickly, but I found it frustrating because most of the time when I orbited, I also needed to pan. After an embarrassing amount of time, I finally caught a glimpse of the command line in the lower left corner of the screen while orbiting. After “Drag to Orbit” it says “Shift=Pan”. Hmmmm. Hold down the shift key while in the orbit command and Pan becomes active. It’s right there where and when you need it, and it’s amazing what this one trick will do to speed things up.

In real life, we don’t have to think about how we look at things, we just move closer, step back, or turn to a different angle. Imagine how slow and awkward you would be in the shop if you tried to cut a fine detail at arms length because you couldn’t remember how to get a closer look, or if you had to do something backwards because you couldn’t remember how to turn around. The same thing goes on in SketchUp, and when you can get around without thinking about how to do it, your modeling skills will make a great leap forward.The bad news is it takes some practice. The good news is it doesn’t take that much practice.

There are a couple of other fine points about navigating. If you right click while in a navigation command, a menu pops up with other options. At the bottom of the list is “Zoom Extents”. That will back up the camera to let you see your entire model. I think of that as my parachute when I zoom in too far and don’t know where I am. On the Camera toolbar are two commands that can also get you out of trouble, “Zoom Previous” and “Zoom Next”. “Zoom Previous” takes you back to the last several camera positions. “Zoom Next” only works after “Zoom Previous”, so you can step back and forth if you need to go back and fix something. It would be nice if “Zoom Next” could take you into the future. You could just open an empty model and click that thing until you were finished. Maybe that will be a feature of SketchUp 9, or someone will come up with a Time Machine plug in. Until then, we just have to practice.

Master the basics of 3D Modeling in SketchUp with my new book “Building Blocks of SketchUp”. It’s in enhanced PDF format, 260 pages with 50 embedded videos and a free guide to SketchUp tools.

This is number 3 in a series of 10 posts. You can read the whole series if you click here.